Herbert Hoover seeks Woodrow Wilson’s approval to release the Attorney General’s opinion regarding recent contracts being in compliance with the Sherman Act.

On the 23rd of August, the Attorney General addressed you a written opinion advising that certain contracts which we were making with various trades were not in violation of the Sherman Act.

Some questions have been raised in Congress, and we are desirous of furnishing to Congress, if occasion arises, a copy of the Attorney General’s opinion. The Attorney General informs us today that he has no objection to our doing this, but as the opinion was addressed to you, he thinks it would be desirable that we should secure your concurrence before doing so. I should be glad to know if it meets with your approval.

I am,
Your obedient servant,
[Hoover] 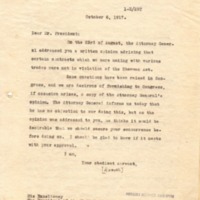