His Excellency
The President of the United States,
Washington, DC

In respect to our discussions as to office accomodation, we beg to set out formally the situation. The rapid expansion of the work of the Food Administration and the more recent but equally urgent growth of the Fuel Administration, the need for greater office space and more efficient interlocation of the various departments, has become imperative.

We have, so far, been able to manage in temporarily leased quarters scattered in a number of buildings, but with resulting loss of efficiency and increase of expense. We see no way, however, in which the growing needs of these two Administrations can continue to be met in this manner, and a proper regard for the effective carrying out of the work prescribed for these Administrations by Congress would indicate the necessity of erecting suitable quarters in which all of the branches of the work can be brought into efficient inter-relation.

A strictly temporary structure would be quite sufficient to meet the requirements, as both the Food and Fuel Administrations are authorized only for the period of the war. 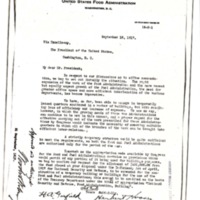