F. G. Bonfils writes to Woodrow Wilson, protesting the appointment of T. B. Stearns to the post of food controller.

It is with some reluctance that we are writing this letter of protest against the appointment of TB. Stearns as food controller of Colorado and our protest is purely impersonal. It’s made for the general good of the administration and of the service.

Mr. Stearns has been and is a very active and violent republican---that’s no crime. Mr. Stearns has always been an enthusiastic and energetic supporter of corporations which also is no crime. But in addition to all these he has been very outspoken in his personal criticisms of the President of the United States and violent in his abuse of the present administration which, considering all conditions, we regard and consider as a crime. All of these facts can be sustained by an abundance of unquestioned evidence.

Now, a personal word about ourselves and, under ordinary conditions, this part of the letter would not have been written. Both Mr. Tammen and myself, The Kansas City Post and The Denver Post, have been the ardent champions and supporters of the administration and of the democratic party thruout the great central west, printing two newspapers, The Kansas City Post and The Denver Post, usually prosperous with wide circulation and great influence. The success of these papers has not been accidental. We have built up these great business enterprises not by indolence or bad judgement and we believe that we know the West, the people, the sentiment and the conditions as well as any two men in the entire western country. We know men, political parties and organizations and neither of us wants any political position of any kind but both of us want to be of genuine service to you and to the people of the entire country.

But---we have not been consulted, directly or indirectly, by you or the administration in a single appointment that has been made thruout this great territory in which we live and in which we publish these two remarkable newspapers. And the inspiration of all the appointments made in this section seems to come from people or from men or from influences that have been and are now uniformly against the democratic party, against the democratic President and against The Denver Post and The Kansas City Post. Don’t you think, Mr. President, that this is very bad judgement on the part of the administration? Don’t you think that we might know something of the men whom you are appointing out in this country or whom you are considering as appointees that might be valuable to you and the administration? Don’t you think before important appointments are made that we might be given an opportunity at least to say that the men you are selecting are good or that they are bad; that they are either fit for the places for which they are being selected or that they do not fit the positions? We have never even been taken into your confidence or even the confidence of the administration sufficiently to learn just what people were selecting the men out thru our territory for the various positions which the administration has filled.

We had thought and hoped that the administration would remember our personal and journalistic loyalty to it and that we might be invited into the council and asked about the appointments that were being made. But up to the present time no invitation and no suggestion of one has been made and we remain unbidden guests to the banquet and are forgotten only when the administration needs help to carry thru its programmes and policies.

Are we so engrossed in seeking justice and recognition for the aliens whom we never see and know that we forget the loyal friends who have been following and serving us for years? It may be that Mr. Tammen and myself expect too much from you and the administration and this letter is written more to find out just where we stand with the administration than for any other purpose. It’s a beautiful thing to have a thoughtful friend at court---whether the court is the president of the United States or whether it is that great and powerful one, the court of public sentiment. And it’s with great satisfaction that we say to you, Mr. President, we have never needed any coaching out here when your interests or the interests of the administration were in the balance. All of which is submitted for your consideration and for a reply from someone who will tell us just where we stand.

With kindest regards and best wishes, I am always, 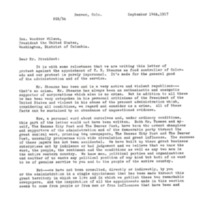