Aside from placing some restrictions upon the export of fats as a temporary measure of solution to our shortage, it appears to me that we should consider a definite plan of stimulating the production of hogs. The world’s demands for fats will increase steadily during the war due to the degenerating animal situation among the Allies, and after peace the additional demands from the Central Powers will be enormous and long continued.

I have, therefore, devised the following tentative plan which I wish to submit for your consideration:

1. Hogs in the United States are, in the last analysis, a corn product. The cost of production and price are interdependent as shown by the inclosed chart. When other feeds are used, it is because they are cheaper than corn and the predominance of corn tends to control the use of all other feeds.

2. Owing to the violent fluctuations in demand for corn and hogs, there have been five periods since the war began in which it was more profitable to sell corn than feed it to hogs at the price of hogs, and three periods the reverse. There were practically only two such periods of unprofitable feeding in the previous eight years. The results of these unprofitable periods is to retard hog production, as the grower is discouraged during these periods from breeding, and these fluctuations due to ear conditions are, I believe, the fundamental reason why our hog production has not increased in volume such as one would expect from the general upward trend of prices which we have had over the entire war period.

3. On preliminary investigation, it appears that the corn price ration to hog is, roughly, ten to eleven bushels of corn to one hundred pounds of hog, and that his menu is spread over a life of eight months in, roughly, the following ratio:

4. It appears to me that, if we should take the weighted average price of corn over this period of eight months, we should arrive at a figure which, if hogs could be marketed, would be welcomed by the producer as an absolute assurance to his industry. If by setting up some instru,mentality, we should on the first of each month make this determination and fix the price for the succeeding month as the price to be paid by the packers, we should not only assure the producer form the day he bred hogs, but also assure him freedom from speculation in the stock yards at day of arrival.

5. The violent fluctuations in the price of hogs tends to lift the price of hog products to the consumer unduly, for at every rise the stocks in warehouses in the whole country are market up, and thus the margin between producer and consumer increased. With a stabilization in price, this must tend to disappear and could effectually be made to do so if arrangements were entered into between the Food Administration and the packers for the fixing of a differential between hogs and their products. We have, or are in the course of carrying out, such an arrangement with the millers and sugar manufacturers, and, although complicated and filled with difficulties, is not, I believe, impossible with the packers, more especially as they are disposed to show the utmost good will in carrying out any programme of national interest.

6. The weakness in this chain lies in that some one must assure the packer a market for the products at the agreed ratio to the price he buys hogs. This, I believe, could be solved by a contract with the Allies to take the whole production in excess of domestic demands at the price above arrived at, such contract to be terminable upon, say, six months’ notice on either side. This would give the producer notice of the break in the assurance.

7. There are thus three parties to be organized and consulted:

(a) The producers.
(b) The packers.
(c) The Allied Governments.

Before, however, I open negotiations as to the acceptance of the principle with these elements, I wish to secure your approval. If the principle is agreed, it will be necessary to assemble a commission to determine the statistical basis upon which the plan is founded, and to set up a commission which will have the judicial function of determining the price each month, based upon such statistical determination. Also, some system of classification of hogs at the yards will need be arrived at and a basis for determining the packers’ ratio.

Would you be so kind as to express your views as to whether I should open the subject for discussion and determine the feeling of the three parties towards it? 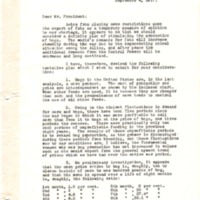