Due to the shortage of corn and the need to use barley and other grains in bread production, Herbert Hoover asks Woodrow Wilson for advise on discussing the matter of closing breweries both in the US and England with the English Food Controller.

The food situation, due primarily to the loss of a large percentage of soft corn and therefore the failure of maturity of quantaitative food supplies that we had reasonably hoped for, and the loss of a considerable amount of even this corn by the breakdown in transportation, raise the serious problem of the use of barley and other grains in the brewing of beer.
Approximately ? bushels will be required to keep the breweries running from now until the first of September and the new harvest in September.

I do not conceive that it would be a right and proper thing to shut down our own breweries unless the English breweries were likewise closed. The Allies are shipping brewing products from this country and likewise making claims upon us for bread, whereas we could use the same amountbarley for making bread here, or, alternatively, they could do the same. Altogether the amount of saving in breadstuffs to be made is not alone a question in this country, but a problem for the English as well and I am wondering if you would consider it a right and proper thing for me to advance to the English Food Controller the joint necessity of closing the breweries on both sides.

I beg to remain
Your obedient servant,
[Herbert Hoover] 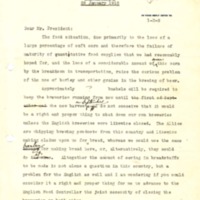