Herbert Hoover responds to the letter by Isidor Jacobs that Joseph Tumulty had sent to him.

I have read Mr. Isidor Jacobs’l etter with a great deal of interest. He apparently does not at all understand the organization in respect to canned products. --Last spring, the Quartermaster’s department discovered that the canned goods output has been already sold and that there were no remaining supplies available. Through the Council of National Defense, they called a meeting of several hundred canners and secured from them the undertaking to set aside a certain percentage of their packs for Army and Navy purposes; the price of these goods to be determined by an independent body. The whole of this matter was administered by the Council of National Defense until a few weeks ago, when we took over thier entire food activities, including their staff, which embraced Mr. Heyl. We have placed an entirely independent man in charge of the whole matter and organized it on a basis that does not at all conform to Mr. Jacobs’ apparent belief.

My representative has been Mr. WVS Thorn, who has never had the remotest interest in the canning industry in his life. Mr. Thorn has recently resigned on account of ill health and is being replaced by Mr. Snyder of Boston who is likewise independent of the canning industry.

It is the duty of this committee tomdetermine the price at which the various canned goods are to be purchased, and after their determination it becomes only a routine matter of allocating the amount of purchases and the details of shipping to each one of the canners who agrees to give up a certain percentage of his pack.

Mr. Heyl, whom I took over from the Council of National Defense, is employed by Messrs. Libby, McNeil and Libby but he has nothing whatever to do with the purchase of any foodstuffs so long as he remains with the Food Administration. He has only the conduct of routine matters in shipment and allocation of orders, the prices of which are determined by the ilnterdepartmental committee referred to.

Mr. Bentley acts, not as Chairman of the canned but as Chairman of the Tin Committee for the various plate manufacturers, which an inter-departmental committee. He also acts on my behalf in dealing with condensed milk manufactures in which he has not the remotest interest, and in the matter of the Food Administration measures in relation to beans and certain other commodities in which he likewise has not interest. Mr. Bentley is a man of abiliyty and I have naturally sought his views from time to time on matters in connection with the types of canned goods where the Food Administration is interested in control. There are largely canned salmon and sardines.

We have not attempted in any manner to control canned fruit as we have considered it more in the nature of a luxury than a necessity.You will, therefore, I think, see that Mr. Isidor Jacobs’ criticism are wholly and absolutely out of line with the actual facts. 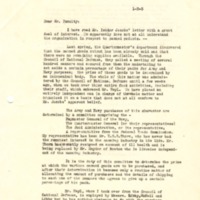