Since we requested the appropriation for building purposes on September 18th last, our personnel and activities have more than doubled, and we now require additional space approximating 100,000 square feet.

We have been obliged to retain the Gordon Hotel Building at a rental of $35,000 a year, although this will be reduced to $18,000. in July of this year. However, even this old building is entirely insufficient for office purposes. The War Department has agreed to allot one-third of the new Ordnance Building, 19th and “B” Streets, which will net about 35,000 feet; and we will require in addition to the space in the Ordnance Building, about 65,000 feet of floor space.

The appropriation of Congress for the Food Administration contains no provision which would permit building operations, and I confirm my verbal request for the allotment of $200,000 from the fund placed at your disposal under the Deficiency Act of April 1917 for National Security and Defense, to be expended for the construction of a temporary building or buildings for the use of the Food Administration, and that this amount be credited on the books of the Treasury Department under the title “National Security and Defense, Food Administration Building 1918”. 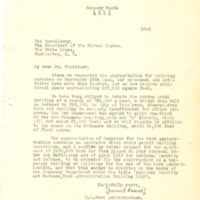