Herbert Hoover writes to Woodrow Wilson about his statement on the sugar shortage being made available to the public since it would not be heard in Congress due to the Christmas recess.

As you are aware, the Senate inquiry on the sugar shortage has been in session for a matter of ten days. I have repeatedly requested permission to appear before the Committee in order that I might make a complete statement of the matters at issue from the Administration’s point of view and give the very cogent reasons for each step taken in the protection of the American people from profiteering and excess prices. I was informed yesterday that I should be heard today at twelve o’clock and had prepared a complete and impersonal statement of the entire sugar question, copy of which I have already sent to you. I was informed late this morning that I would not be heard and that the Committee had adjourned over Christmas. I thereupon sent the statement to the Committee and asked that it be introduced into the record and through Judge Lindlyey requested that it might be given to the public in order that many mis-impressions might be dispelled.

Senator Jones moved that the Committee place it in the record and give it to the public but the Committee refused and also refused to say whether they would consider it discourteous or not if we issued it to the Press. I cannot but feel that here is a double attempt to stifle truth and to leave prejudice in the minds of the public. Senator Jones authorizes me to say to you that he thinks this statement should be given to the Press and that nothing will alter the mind of the majority of this Sub-Committee.

May I request that if you can spare a moment to glance over the statement to witness its impersonal nature, and if you find it in order, that you would consider whether or not it could be issued as from you through Mr. Creel’s bureau to the public, as the statement was forwarded to you as much as to the Senate Committee. 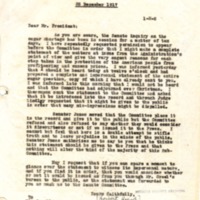