Herbert Hoovers submits a proclamation limiting the alcoholic content of beer and the amount of grain used by brewers to Woodrow Wilson for his approval.

I submit herewith a proclamation limiting the alcoholic content of beer to 2.75% by weight, and the amount of grain which may be used by each brewer to 70% of his 1917 consumption of grain. My letter of November 19 recommended that the alcoholic content of beer be reduced to 3 per cent by volume, or 2.4 per cent by weight. At the urgent request of leading brewers who represent that the low alcoholic content proposed would substantially alter the character of beer and render it unpalatable, I have raised the percentage from 2.4 by weight to 2.75 by weight. The latter figure represents a reduction from the present average content of from 25 to 35 per cent.

The reduction of 30 per cent in the amount of material used should result in saving of approximately eighteen million bushels of grain during the year 1918 without reducing the barrelage of beer from that of the year 1917.

The Commissioner of Internal Revenue has approved the form of the proclamation, and is preparing regulations for its enforcement. 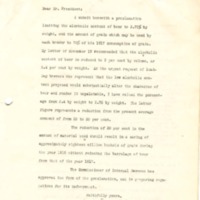