Herbert Hoover writes to Woodrow Wilson about limiting exports on pork, butter, and other forms of fat like vegetable oil and tallow.

As I stated yesterday, I am greatly disturbed with regard to our whole situation as to fats. They fall naturally into three groups, namely, pork products, dairy products, vegetable oils and substitute fat products.

I wish to present for your consideration, the following recommendations:

DAIRY PRODUCTS.
During the past fiscal year we exported over 25,000,000 lbs. of butter against a pre-war net normal of something under 2,000,000 lbs. The high price of feedingstuffs has probably reduced our output. In any event, we are in no position to export to any quarter, more than the pre-war net normals, for butter is not only rising rapidly in price, but there are localities of actual scarcity. Fortunately, the Allies have lately been drawing but little butter.

Therefore, my recommendation is that for the present we should stop all butter exports and we can relax later toward the Allies if their necessities compel it.

Our exports of cheese and condensed milk have greatly increased but there are other factors involved which are not wholly clear and may be solved by the embargo of butter. In any event, I should like to reserve any recommendation for the present.

VEGETABLE AND SUBSTITUTE FATS.
The export of various vegetable oils, tallow and soap, and other fat products, are much above normal to many neutral countries, although below normal to others, and prices are rising. In any rate, these substitutes would come rapidly into demand to replace any reduction of pork and dairy products.

I should like to recommednd that we should limit exports to neutrals to pre-war normal or to the average of 1916-17, whichever is the lesser.

If these recommendations, or part of them, meet with your approval, will you kindly indicate as much to the Exports Administrative Board. 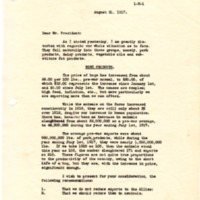