Herbert Hoover writes to Woodrow Wilson to request that key leaders in agriculture be automatically exempt from the draft in order to avoid damage to food production.

Delegations from several parts of the country have been to see me in connection with the exemption of a certain class of agriculturalists under the draft, and I have, in addition, had the advantage of a conference in Chicago with two hundred odd editors of agricultural publications from all over the country on this and other subjects.

It does appear to me that a serious situation is arising from the operation of the draft law against men who may be styled “key men” in agriculture, that is, men of the foreman, manager and ownership type, the draft of whom will certianly diminish the food production.

From all quarters I have found no disposition of a desire to diminish the quotas of the states in question, but a desire that some definite form of exemption should be initiated towards men of this character, and a larger proportion of the draft thrown upon the purely laboring and town classes.

A difficulty also lies in that a great many of the “key men” in question have too much patriotism to themselves make application for exemption.I regard the matter as one of extreme importance to our whole food supply, and that these men should receive even greater consideration than “key men” in industrial establishments.

It does not appear that any action can be taken without inspiration from you, and I sincerely hope you may be able to give it consideration.If it seems desirable to you that this class should be exempted, it would be very desirable to have, in addition to instructions to this effect, some expression from you that such men are as much in the service of the nation as men at the front, in order that the patriotic scruples of many should be overcome.

I beg to remain
Your obedient servant,
[Herbert Hoover] 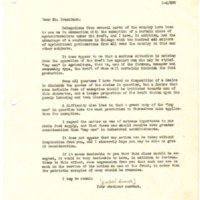