Herbert Hoover writes to Joseph P. Tumulty regarding an executive order about the Food Administration that was sent to Woodrow Wilson to sign.

The Treasury informed me last night that they have sent to the President an executive order for signature, relating to the method of accounting and disbursing the money of the Grain Corporation which we have formed to handle the commercial side of the Food Administration.I am very anxious, indeed, that the President should not sign this order untill after I have had an opportunity for personal consultation with Mr. McAddo, and I am convinced that the Treasury entirely misunderstands the whole objective in putting the work in corporation form. 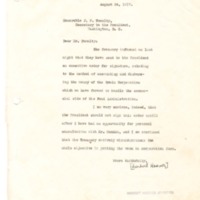