We are engaged in organizing a definite course of instruction in all of the schools, primary as well as secondary, on nutrition and food economics generally. We are having the fine co-operation of the Bureau of Education in the preparation and distribution of a series of minor text-books on this subject. We have secured Dr. Judd, of Chicago University, to take charge of the actual work of preparation.

We feel that, by taking advantage of the war emotion, we here have an opportunity of introducing intelligibly into the minds of the children, not only fundamental data on nutrition, but also of being able to mprobably secure its permanent inclusion in school curricula, and, therefore, feel that it is a matter of more than ordinary propaganda importance.

After, however, preparing the material and securing, through the Bureau of Education, its introduction, we still need some strong incentive for the public schools to adopt it, and it is the feeling of all our co-workers that if you could see your way to address a letter somewhat after the enclosed text to Professor Thach, which letter we would circulate to the whole of the public school system, it would have an enormous influence in securing the adoption of this instruction.

I hesitate greatly to trouble you over such matters, but I believe it is of such character that it warrants some attention in the midst of your great multitude of labor. 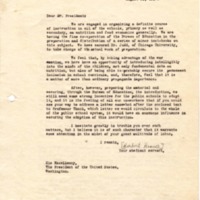