Herbert Hoover asks Woodrow Wilson to recognize those in the grain industry who have been so supportive of the Food Administration’s work.

I would like you, if you could take a moment, to consider what I think is the finest exhibit of patriotism shown by the commercial men in this country, that has been seen in Washington.After launching our plan for total control of the wheat and rye business of the country, we invited between on-hundred and one-hundred and twenty of the principal dealers and elevator men in the country concerned in the grain business, to come to Washington to meet us, realizing that it was desirable that we should secure their cooperation and that the action we had taken meant a greater sacrifice to them than ajny other action which may be taken by the Government in trade matters, because it marks the elimination of some of them absolutely from business until after the war, and minimizes the business of all of them. The attached resolution should not only give you confidence in the soundness of the program, but also encouragement as to the willingness of our people to sacrifice.

Some fifteen of these gentlemen are coming on the Food Administration as volunteers to carry out the work of the Grain Division in the purchase and sale of grain, and these particular men have divested themselves of all interest in the grain trade, and are, at their express wish, serving the government for the period of the war without compensation.

I feel that if you could at some appropriate occasion give some expression of appreciation of the fine action of this whole trade, it would be a great stimulous to others in undertaking the lesser burdens which we are asking of them.

I beg to remain,
[Hoover] 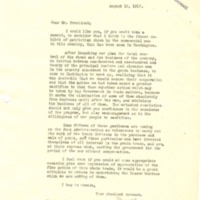