Curtis Lindley sends Herbert Hoover a letter to sign and present to Woodrow Wilson in an attempt to settle the controversy of the Franking privilege.

Department
Herewith find letter prepared for your signature to be presented to the President at the earliest opportunity, in an endeavor to get the controversy over the Franking privilege settled with the Postmaster General and the Treasury Department. Later in the day I will have Judge Warwick’s ruling in writing, and perhaps you might send the two contradictory rulings to the President. However, this may be done later if called for. The matter is of considerable importance, as you know, and should be sent to the Executive Office at the earliest moment. 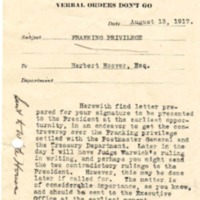