Herbert Hoover thanks Tumulty for sending him the Congressional Record regarding Mr. Carey declaring it a lie.

I am indeed greatly obliged for your note and the extracts from the Congressional Record with regard to Mr. Carey.

The whole of the story is a lie as usual. Mr. Carey is a gentleman whom we have considered as a possible assistant in the grain buying division, in a number 5 or number 6 position. He has been very highly recommended but we have made no appointments whatever pending the President’s approval, although we have, under his authoirty, endeavored to find out the men we may want in order to get the Food Bill in operation at the earliest possible moment. In any event, the statement that, “he will have complete governmental control of all foodstuffs shipped into St. Paul and Minneapolis for consumptoion in this country and export abroad to the Allies,” is just on a par with the other damn lies that have been perpetrated during the last ten days.

I have made no reply to anything said by Mr. Reed or the others. Scarcely a statement made contains an element of truth except in regard to some foolish stuff sent to the press as a result of a hurried volunteer organization and overzealousness on the part of some ladies who were anxious to get their stories in the papers. This was put under iron-clad restraint a fortnight ago, but in any event, it seems too trivial for words.

Just as one illumination out of many that have come to hand, I enclose you a copy of some correspondence between Senator Reed and a certain Miss Todd. 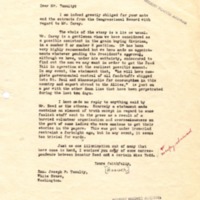