Herbert Hoover sends Woodrow Wilson his response regarding the farmer and wheat prices.

Herewith find and note a letter I have written in response to your request through Mr. Burleson, from which I hope you will delete anything which you think unwise to publish. The situation in the farming section of the country, as indicated by the Ballard-Messmore Grain Company telegram, which is but a specimen of what we are receiving, shows that the farmer seems to have gotten the notion that the falling wheat is due to the proposed legislative action, while in fact, it is due to causes which the legislation could in a large degree remedy, unless the agricultural population may speak a further dropping process. Therefore, we have gone over and endeavored with some care to explain what the operative, economic causes are, and if it expresses the matter properly, should have the effect of bringing the agricultural population behind the legislation. 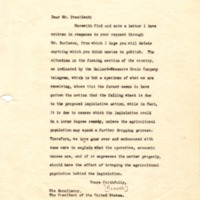