Herbert Hoover writes to Julius Barnes about reimposing a thirty day storage rule for wheat or flour in order to guard against panic.

In continuation of our      do you not think the entire situation would be remedied by instituting regulations reimposing the thirty day storage rule on wheat or flour, effective between now and August first. This could be done by yourself under the new wheat law and I should think it more desirable to do so than to revive the Food Administration authority with its danger of collapse at any moment through ythe signature of Peace. I am entirely prepared to join with you in responsibility, therefore and if you thihnk wise you could issue a joint statement to the general intent that it is inconceivable that speculation and hoarding, either delivberate or iunintentional, through accumulaton of unnecessary stocks, can be allowed to take place against the nation’s bread or the bread of the world. The arrangements for limitation of exports amply protect supplies to the United States for normal consumption until next harvest. The prospects of a large harvest do not warrant nany accumulation of stocks at the present time and aside from the rule imposed upon certain trades directly under the law, we appeal to the whoellesale trades, the retail trades and the public that they do not carry more stocks of hwheat and flour than absolutely necessary for their day to day use; that the suppression of rising prices rests largely with the consumer as to twhether they are willing as so often in the past to voluntarily accept such advice as this and that if the entire trade and public will follow this suggestion that there should be no rise in the price of flour PERIOD HOOVER 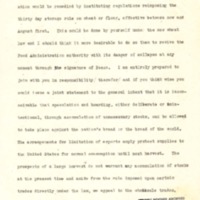