I am wondering if there isn't some method by which the recognition of the full independence of Finland could not be expedited. They have now had a general election,; they have created a responsible ministry; this ministry is of liberal and, in the main, Pro-Allied character. There are many reasons why this matter should be undertaken, and at once.

1.The United States has always had a great sentiment for the suffering of the Finnish people and their struggle over a century to gain independence.

2.-By lack of recognition, they are absolutely isolated from a commercial point of view from the rest of the world. They are unable to market their products except by the sufferance of special arrangements with governments at every operation. They are totally unable to extablish credits, although they have a great deal of reserource, as no bank can loan money to a country of unrecognized government. They are isolated by censorship. Their citizens are not allowed to move as their passports do not run.

3.The most pressing problem is their food supply. In January last the Finns were actually starving in hundreds. Order in the country was preserved by eit sheer military repression. By one measure and another, and altogether out of Finnish resources without the cost of a doollar to us, we have for the last three months fed Finland. Order has been restored. The populations are rapidly recovering nutritional conditions. They have begun to take hope of the future. All through these operations they have shown the most sturdy independence and have asked for nothing but facilities to make their own solutions. Their resources are now practically exhausted, unless they can have immediate recognition, so that they can create further commercial resources of their own.

If ever there was a case for helping a people who are making a sturdy fight to get on a basis of liberal democracy, and are asking no charity of the world whategver, this is the case, and I am convinced from our reports that unless Finland is recognized within a very short time the present government cannot survive the difficulties with which it is faced. One instance would show the utter paralysis under which they are suffering. Their banks have deposits of upwards of Ten Millions of Dollars in the United States, but so long as their government is unrecognized our American banks must refuse to honor the drafts of the Finnish banks, as they can have no assurance that the control and ownership of these banks is the same as that that existed at the time the deposits were made. It is purely a technical question, but it, amongst numerous other instances of this character, threatens absolutely to destroy the Finnish Government.

Nor do I see why any half measures need to be taken in this matter. They have gone through every cycle that the world could demand in political evolution to the point of an independent people, and I feel that they would long since have been recognized had it not been for the perfect cloud of other questions that surrounds the world. 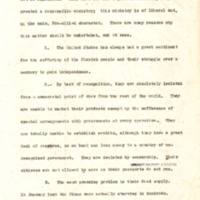 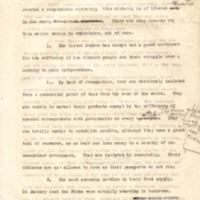