Herbert Hoover tells Woodrow Wilson he is in danger of losing the best members of their staff since they are not able to bring their wives with them to Europe.

Some difficulties have arisen in my staff owing to the very proper ruling in the Peace Commission prohibiting wives from coming to Europe, and I am about to lose some of my best men unless this can be effected. A good many of them have been away from the States for all the way up to two years and now have opportunities of going home and joining their families. Unless I can get their wives over, I shall lose their services at the most critical period.

It does not appear to me that men, whether they be Army officers or otherwise, who are working on food work fall in quite the same class as others. When army officers they are no longer compelled to live in mess and therefore are no interference. I will need to nhold them here until late August or September, at which time the transport of the Army will have been largely completed and there will no longer be any shortage of passenger space. Of course there is no difficulty about transportation in coming this way.

I would indeed be glad if you could see your way to give a hint to the State Department that they should issue passports on my request for the wives of men on my own staff. I dislike very much to bother you over a trivial detail of this kind, but I understand the whole matter has been referred to you for decision. I have a little personal interest in this as I have seen comparatively little of my own family in five years and would like to have them over myself. Of course, I could not think of doing so unless the members of my staff had the same privilege.


His Excellency,
The President of the United States,
PARIS. 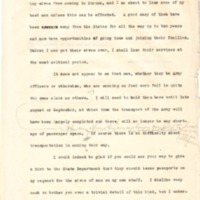