I feel it is my duty to lay before you in just as few words as possible my views as to the American relation to Bolshevism and its manifestations. These views at least have the merit of being an analysis of information and thought gleaned from the oindependent sources which I now have over the whole of Europe, through our widespread relief organization.

It simply cannot be denied that this swinging of the social pendulum from the tyranny of extreme right to the tyranny of the extreme left is based on a foundation of real social grievance. The tyranny of the reactionaries in Eastern and Central Europe for generations before the war and the suffering of their comman people is but a commonplace to every social student. This situation was thrown into bold relief by the war and the breakdown of these reactionary tyrannies. After fighting actually stopped on the various fronts the famine which has followed has further silhouetted the gulf between the lower and upper classes. The poor were starved and driven mad in the presence of extravagance and waste.

It is to be noticed that the Bolshevik ascendency or even their strong attempts are so far confined to areas of former reactionary tyranny. Their courses represent the not unnatural violence of a mass of ignorant humanity, who themselves have learned of tyranny and violence over generations. Our people who enjoy so great liberty and general comfort, cannot fail to sympathize to some degree with these blind gropings for better social condition. If former revolutions in ignorant masses are any guide, the pendulum will yet swing back to some moderate position when through bitter experience have learned the economic and social follies of their present obsessions. Furthermore no greater failure can come to the world than that these foolish ideas should have an opportunity somewhere of bankrupting themselves.

It is not necessary for any American to debate the utter foolishness of their economic tenets. We must all agree that our processes of production and distribution, the outgrowth of a hundred generations, in their stimulation to individual initiative, their large equality of opportunity and infinite development of mind and body, while not perfect, comes about as near perfection as is possible from the mixture of avarice, ambition, ualtruism, intelligence, ignorance, education, of which the human animal is today composed. The Bolshevik's land of illusion is that he can perfect these human qualities by destroying the basic processes of production and distribution instead of devoting himself to securing a better distribution of the collective surplus.

Politically, the Bolsheviki most certainly represents qa minority in every country where they are in control, and as such they constitute a tyranny that is the negation of democracy for democracy as I see it must rest on the execution of the will of the majority expressed by free and unterrified suffrage. As a tyranny, the Bolshevik has resorted to terror, blood and murder to a degree long since abandoned even amongst reactionary tyrannies. He has even to greater degree relied upon criminal instinct to support his doctrines than even autocracy did. By enveloping into his doctrines the cry of the helpless and the downtrodden, he has embraced a large degree of emotionalism and has thereby given an impulse to his propaganda comparable only to that impulse of large spiritual movements. This propaganda, however, in my view will stir other populations only in ration to their proportions of poor and ignorant. I feel myself, therefore, that the political danger of spread of Bolshevism by propaganda is a direct factor of the social and political development of the population which they attempt to impregnate. Where the gulf between the middle classes and the lower classes is large, and where the lower classes have been kept in ignorance and distress this propaganda will be fatal and do violence to normal democratic development. For these reasons, I have no fear of it in the United States, and my fears as to other countries would be measured by the above criterion. It is possible that his Soviet type of government might take hold in some other countries as a form of democracy, but its virulence will be tempered by their previous degree of political subversion.

There remains in my mind one more point to be examined, that is as to whether the Bolshevik centers now stirred by great emotional hopes will not undertake large military crusades in an attempt to impose these doctrines on other defenseless people. This is a point on which my mind is divided with the evidence at hand, and it seems to me that the whole treatment of this problem must revolve greatly on the determination of this one question. If this spirit is inherent in his doctrine, it appears to me that we must disregard all other questions and be prepared to fight for exactly the same reasons that we entered the European War against Germany. If this is not the case, then it appears to me that from an American point of view we should not involve ourselves in what may be a twenty year war in Europe. The American people cannot say that we are going to insist that any given population must work out their internal social problems according to our particular conception of democracy. In any event, I have the most serious doubt that outside forces entering upon such an enterprise can do other than infinite harm for any great wane of emotion will grow and spread under repression. In the swing of the social pendulum from the extreme left back toward the right, it will find the point of stabilization that could never be established by outside intervention.I think we have also to contemplate what would actually happen if we undertook military intervention in say a case like Hungary. We should probably be involved in years of police duty and our first act would probably be to reestablish the reactionary classes in their economic domination over the lower classes. This is against our fundamental national spirit, and I doubt whether our soldiers under these circumstances could resist infection with Bolshevik ideas. It also requires consideration as to whether or not our people at home on gradual enlightenment as to the social wrongs of the lower classes in these countries, would stand for our providing power by which such reactionaries held their position, and we should perchance be thrown in to an attempt as governors to work out some social reorganization of these countries. We thus become a mandatory with a vengeance. We become, in fact, one of four mandatories, each with a different poliyivtical and social outlook. Furthermore in our present engagements with France, England and Italy, we become a junior in this partnership of four.

In all those lights, I have the following three suggestions:

First: We cannot even remotely recognize this murderous tyranny without stimulating revolution in every country in Europe and without transgressing on every National ideal of our own.

Second: That some Neutral orf international reputation for probity and ability should be selected to create a second Belgian Relief Commission for Russia; that the Northern Neutrals who are especially interested both politically and financially in the restoration of better conditions in Russia, should be asked to give to him diplomatic, financial and transportation; support; that he should open negotiations with the Allied governments asaying to them that UI wish to enter upon the humane work of saving life and ask upon the conditions upon which ships carrying food and other necessaries will be allowed to pass. He should be told that we will raise no obstructions and would even help in his humanitarian task if he gets assurances that will cease all militant action across certain defined boundaries and cease their subsidizing of revolutions abroad. Under this conditions that he could raise money, ships and food either from inside or outside Russia; that he must secure an agreement covering equitable distribution, and he might even stipulate that Germany help pay for this. It would appear to me that such an offer would at least test out whether this is a militant force engrossed upon world domination, and if such an agrrangement could be accomplished it might at least give a period of rest along the frontiers of Europe and would give some hope of stabilization. This plan does not envolve any recognition or relationship by the Allies of the Bolshevik murderers now in control any more than England recognized Germany in its deals with the Belgian Relief. Time can thus be taken to determine whether or not this whole system is a world danger, and whether the Russian people will hnot themselves swing back to moderation and themselves bankrupt these ideas. This plan, if successful, would save an immensity of helpless human life and would save our country from further entanglements which today slowly pull us from our National ideals.Third: I feel strongly the time has arrived for you to reassert your spiritual leadership of democracy in the world as opposed to tyrannies of all kinds. If you scould take an early opportunity to analyze Bolshevism from its political, economic, and its human points of view, while hardly its aspirations sympathetically show its utter foolishness as a basis of social development; show the true to social ends; rap our own reactionaries; point the steady progress of our democracy in these roads of social betterment; I believe you would arraign orderly progress against anarchy in the hearts of the discouraged men not alone in Russia but in every Allied country. If its militant features were aligned with Prussianism as an attempt at world domination that we do not stand for, it would check the fears that haunt all men’s minds. 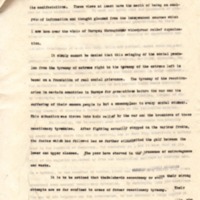 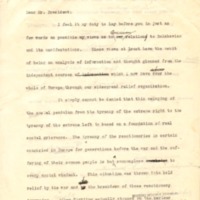 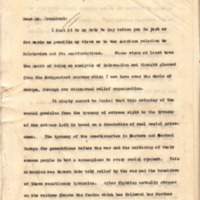