After joint conference War Department, Shipping Board, ourselves, Hurley states that maximum tonnage that can be allocated for relief shipments up to end of April is three hundred thousand tons deadweight. In securing this tonnage army has released some cargo boats carrying army supplies and proposes hereafter to load on transports. Shipping Board is committeed to meet during April French railway car program requiring one hundred thousand deadweight tons, this obligation having been taken over from War Department upon terms agreed upon with French Government and to relieve army tonnage. Army, however, will continue to make car shipments during April against the balance due on their engagement and we understand will forward during April twelve hundred cars. It seems to us that hthis delivery by the army should satisfy the French and that they would consent to the suspension of Shipping Board shipments during the month of April in which event Shipping Board would give us additional one hundred thousand tons deadweight. To meet this tonnage we have been obliged to accept April lake steamers some of which are coalburners and uneconomical as they are obliged to take return bunkers using up cargo space. Above figures take this reduced cargo capacity into account. Shipping Board advise obliged to ask higher rates these vessels account difference cost operation. Shipping Board will absolutely make no committements beyond end of April leaving this for future negotiations after we are advised as to availability of Germany cargo steamers. Hurley cannot be dissuaded from the opinion that you continually exaggerate the conditions although Presidents’ message fully substantiated. If we secure additional hundred thousand deadweight tons referred to, tonnage for February, March, April will total seven hundred seventy three thousand three hundred fifty one cargo tons made up as follows: First sailed February one hundred twelve thousand five hundred ninety one; second sailed March one hundred ninety eight thousand six hundred eighty; third loading and previsouly named for March, April including Pacific Coast flour one hunedred sixty two thousand eighty; fourth additional cargo tons promised for April three hundred thousand. 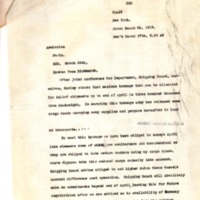