Herbert Hoover sends Woodrow Wilson a telegram from Mr. Hurley who will not be able to deliver the needed tonnage of food supplies in April.

I have received the attached telegram regarding Mr. Hurley’s response to my request for 500,000 tons of food loaded in the month of April and in response to your direction to him and the War Department that he should find his tonnage. Mr. Hurley states that he will not find more than 2300,000 tons.In arriving at 5000,000 tons, I took the theoretical necessity of the various peoples under relief, which amounted to 800,000 tons, I reduced each single item to the lowest point that I thought was possible, and arrived at 620,000 tons but knowing the acuteness of Mr. Hurley’s position I reduced it on bloc to 500,000 tons. I wish to say that I simply cannot take the responsibility for this situation unless hthis tonnage is provided as we have requested. Every country that we have under relief is rumbling with social explosiaon. All the peoples in these countries are under drastic food regime and to out their practical necessities to 60% can mean only a total collapse.


His Excellency,
The President of the United States,
P a r i s. 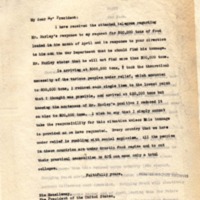