Herbert Hoover writes to Woodrow Wilson about the difficulty in shipping the needed tonnage of food to Europe.

I have received the following telegram from Washington witth regard to the provision of 500,000 tons of shipping for Relief loaading during the month of March:

I can only say frankly that I simply cannot take the responsibility for this situation unless the tonnage is provided which we have requested. It had already been cut to the bone by a reduction of over 300,000 tons from the theorietical program which we would like to deliver, by which reduction I had considered we were even then entertaining serious dangers. The further reduction made by Mr. Hurley from 500,000 tons to 300,000 tons renders the task insolvable.

For refreshment of your memory, I quote telegram below which you sent at my suggestion:----


His Excellency,
The President of the United States,
P a r i s. 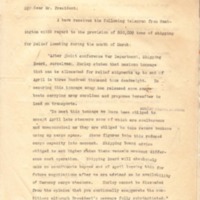