Herbert Hoover lets Woodrow Wilson know that the relief money he authorized cannot be sent to Serbia until the State Department certifies the Serbian government.

Under your strong recommendation of six weeks ago, the Treasury undertook to make advances to Serbia of $15,000,000 for food. After long delays caused by difficulties of communication and arrangement of the precise details required by the Treasury, the matter was apparently consummated. A new difficulty has now arisen because the State Department feels itself unable to certify that the present Serbian Government is constitutionally founded and the Treasury refuses to make advances without the necessary certificateion from the State Department. I do not see how we can bridge over this position without your intervention.

In the meantime, except for such amounts of food as we could spare from the appropriation from your private fund, the Serbians are now without supplies. The $100,000,000 fund was provided to take care of other governments than those which could receive direct Treasury advances. I have discussed the matter with Mr. Lansing and he informs me that if you will address the enclosed letter to him he will take the necessary steps. 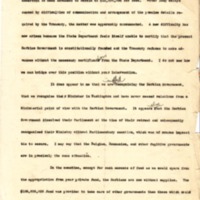