Herbert Hoover alerts Woodrow Wilson to the situation with the Italian railroad and suggests that money not be sent to the Italian government until the Allies can use the railroad again.

The feeling of the Czecho-Slovenes, Viennese, Serbians all revolve around the use of port facilities and a single railway running out of Trieste. The Italians have taken such an attitude towards these other peoples that the operation of the railway is practically hopeless for the distance that it traverses Italian occupied territory, and also they have also stopped all communication through to Trieste from these territories and we are not even able to send the most commonplace telegrams with regard to food. They are apparantly driving all of the other races than Italians out of Trieste and the consequence is that we have little reliable labor for discharging ships. We have used every argument possible with the Italian authorities and there is in my view but one solution and that is that the operation of such docks and railways as we need for feeding these interior people shall be placed under the direction of the Interallied Food Commission sitting at Trieste and the actual executive control vested in the American member. Their attitude on this questiohn and many others is such that I want to protest most strongly against any further Treasury advances to the Italian Government until this matter of fearful injustice is put right.

If you approve, I will ask Mr. Davis to make it a condition of further advances with the Treasury that this situation shall be straightened out to my satisfaction. 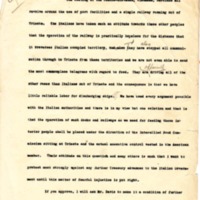