An error in the enclosure sent to you in my letter of yesterday, with respect to the relaxation of blockade, has I am sorry to say confused your mind on the matter. I enclose herewith the resolution drafted by Mr. McCormick and myself, which we are anxious to get hrough the Supreme War Council. It has three main purposes:

FIRST. There is no right in the law of God or man that we should longer continue to starve neutrals now that we have a surplus of food. That is the object of the first part of the first resolution.

SECOND. The French, by obstruction of every financial measure that we can propose to the feeding of Germany in the attempt to compel us to loan money to Germany for this purpose, have defeated every step so far for getting them the food to Germany which we have been promising for theree months. The object of the second part of the first resolution and of the second resolution is to at least find some channel by which the Germans can help themselves by trade with neutrals and South America.

THIRD. The object of the third resolution is to allow the peopople bordering on the Mediterranean to get into production and trade with all their might and by so doing not only revive their commercial life but also to a large degree supply themselves with food and other commodities and thus take a large part of the burden of relief from the back of the various our governments for relief.

There is no peossibility that with all the restrictions on trade taken off the old Em taken off, that the old Empire of Austria that she could ever resurrect any military importance. and, aAt the present time, we are actually furnishing food to points in Austria at the expense of governments that could be taken care of by private individuals if they could revive their foreign credits without enemy trade restrictiosns, blockade, and censorhship of etc on commercial transaction. Of importance also in the longer view is that the Southwestern area of Europe simply cannot be fed with any governmental resources that either the Allies or ourselves can produce over the next six months, and unless they must be allowed to get into the production of profitable exportable commodities at the earliest possible moment.

I have worked consistently since arriving in Europe on the 25th day of November to secure these objects and I have to congfess that although they have been accepted in principle, in first one department and one government after another, they are constantly defeated. by one bureaucratic and special selfingterest after another of various governments, and I can assure you that the blockade against neutrals in and the Southwest is being used today for purely economic ends, when its sole justification was for the protection and furtherance of military operations, which justification is now gone.I realize that there is still sojme political importance in mqaintaining the blockade against Germany within certain limits, but it does not apply to the rest of Europe. I can see no hope of securing the removal of these restrictions except by a direct and strong intervention through yourself and mandatory orders given by the Supreme War Council.

Any reference to a given department in any government will in many cases receive a negative opinion on those judgments, from individuals simply because interest in the se,lf perpetuation of bureaucracy and or special interests of government endeavor or trade in a desire to continue the use of these this weapon for aims entirely apart from the war. and, therefore, I am confident that no action is possible except of a mandatory character from the top. 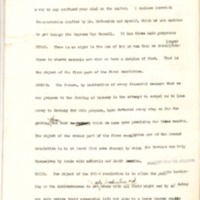