I am strongly impressed with the fdact that some immediate action needs to be taken with regard to the internal conditions in Germany. As you are aware, there is incipient or practical Bolshevist control in many of the large centres; there is also - apparently largely supported - a movement towards the election of a constitutional assembly of some kind.

Viewing the German Emprire from a food point of view, there will be no hope of saving these people from starvation if Bolshevist activities extend over the Empire as in the Ccase of Russia, or even if they control local centres, with the sequent breakdown in the control of distribution of the existinwg food and of commercial activities. Even were such outbreaks purely local, it would result in the isolation of these loacalities and a break in the entire situation. The whole problem depends upon continued equitable distribution of the native food stocks.

In order to visualize to you somewhat the problem, if we say that the normal consumption of the German people, without restraint, is 100, the German E,pire, within its old boundaries, must possess to-day somewhere about 60 per cent.. of this quantity. If there is distribution and control in restriction of unnecessary consumption, the population can probably go through without starvation on something like 80 per cent. of normal, and therefore. the problem is to find 20 per cent. by way of imports. If there is an exctension of the Bolshevist movement there is in effect created a minute sSeparatist movement and so far as food is concerned we shall have some localities haoarding and consuming 100 out of their local supplies, and the problem will be unsoolvable. by way of the available supplies in the world for import. All this aside from the almost impossible conception of dealing with distribution in the hands of such highly incompetent agencies as Bolshevist Committees.

It would appear to me, therefore, that some announcement with regard to food policies in Germany is critically necessary, and at once. If that announcement could be made something on the line that the United States and the Allies could only hope to assist the food difficulties in Germany until the next harvest, through the hands of a stable and experienced government, and that under no circumsatance will the United States and Allies entertain food assistance to lo localities in Germany through the hands of Bolshevist elements, it would at once strengthen the whole political situation and probably entirely eliminate the incipient Bolshevism in progress.

I realize this is a perhaps radical suggestion, but I feel it must be entertained. 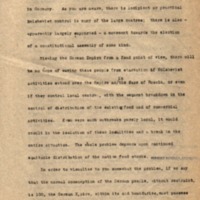