I am in receipt of a cable from Mr. Tumulty with regard to the reopening of brewing in the United States, and have also received direct cables from our own office to the same effect.

It appears to me that the matter has several phases: he first is that as quickly as shipping becomes more available for exports from the United States, which is not likely to be more than 30 days hends, the real situation with regard to feedings stuffs for animals will quickly develop. The world is entirely short of these grains and from a point of view of food conservation there can be no question as to the desirability of the cessation of brewing.

The matter, however, is one that has many internal and economic complexities which I do not pretent bto judge at this distance. I may mention, however, that in addition to the very difficult internal problems involved there is a tendency to expand brewing in Europe under the same tuypes of pressure.

You will of course realise that under the Conversional Act, brewing would in any event cease on the 1st of July, and that the labour difficulties cannot be so great now as they will be at that time when there is a larger demobilisation.

It would generally appear to me that if you do not wish yourself to make a decision on a matter so difficult to determine from this end, that it is a matter which should be settled by the Cabinet as a whole. 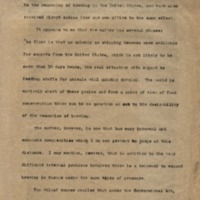