We are squarely up against the determination of a matter of National policy that I feel is of so much intrinsic importance that it must rest with you for discus decision I have no right to act without your approval.

In very bald terms it is simply the creation of combinations in restraint of trade to reduce prices. The operations are of varying grade degree of such combinations, and the clearest case being in the matter of beet sugar.

The Certain Cuban producers (who are out of our reach) have combined to force up the price of the remaining 1916 sugar crop prior to the new crop in December and have lifted the price of raw sugar in New York over from 5.8 5.9 cents July 1st June to 7.5 Aug. 16th and this against a 3 year pre war average of 4.2 cents The recent advance of 1.6 cents alone will represent an added tax upon the American people of over $30 000 000 by the end of December.

During Sept – December our beet crop of about 850 000 tons comes into the market. and We have had a number of conferences with the representatives of the principal Beet sugar concerns and they are disposed to agree to fix a price comparable with New Cuban Raws at New York of cents and this would indicate a saving to the consumer of cents or over before the new Cuban crop is available. We will need take measures to control the latter later in the year.

The In order toOur powers to deal with the 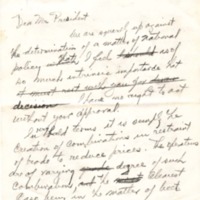