Herbert Hoover writes to Woodrow Wilson about the projected world food supply at the end of the war.

We have now completed a broad survey of the food supplies available in the world in case of an early peace, together with the world's necessities. We have calculated the supplies as being the surplus in any given commodity exportable from any country and have assumed the total export of such a surplus. In the matter of necessities we have formulated piour estimatese on the basis of the preservation of public health and tranzquility, not upon the restoration of conditions to normal; that is, there would be an increase of food supply to the area at pr4esent controlled by the Central Empires but no very consequential increase to the Allies. The period covered by these calculations is that until the next harvest. I will not trouble you with the elaborate details referring to each country.

The following table shoews the results in tons and the amounts of such exports as the United States would have to contribute under these conditions.-

1 *This being the limit of refrigerating ship capacity.
2 *Assuming Cuba as part of US supplies as we own their crop.

The following general points stand out in this survey:

1. The amounts given as “total import necessities” are probably 1010,000,000 tons short of enough to provide normal pre-war consumption.

2. The total export supplies are insufficient to provide even the “total import necessities” as based on this table. In other words, there is a deficiency evey below what we consider is necessary desirable to preserve health and tranquility.

3. This situation will be politically is somewhat ameliorated by the fact that there is a sufficiency of breadstuffs which indeed comprise fifty per cent. of the food intake of European people. and therefore largely dominate public mind.

4. The critical shortage is in the fats where the deficiency amounts, in our view, to about 35%. and will fall below the necessary health minimum.

5. The only deficiency in which the United States prarticipates is that of sugar, and this will indeed present a serious problem.

6. Of the above quantities of exportable food, United States and Cuba will be furnishing about 50% of the total calculated world’s import necessities.

7. With the inability to even complete this programme of necessities, which is itself below the amount that would be consumed if available, it is positively necessary that we have a continuance of the embargo so that we may regulate the outlet, or every one of our foodstuffs will be overdrawn and our own people faced with shortages next spring.

8. Another and very pertinent reason for continuance of the embargo lies in the fact that with the whole world bidding in our market without restraint, we shall have an era of high prices, of profiteering and speculation such as we have never yet experienced.

9/ Some systematic arrangement will be necessary for the determination as to how our available surpluses are to be divided amongst the various nations and to see to it that these divisions are carried out. without disturbing our markets.

10. Our surpluses might be somewhat increased by a continuation of conservation. 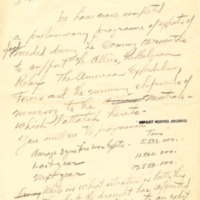 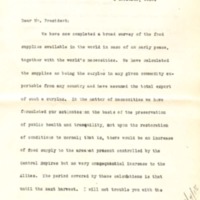