The task of the Belgian Relief Commission,- the preservation of the life of 10,000,000 coccupied Belgians and French over these four years - is now rapidly drawing to conclusion and questions as to what further assistance should be extended to these Belgian people and as to what disposition shall be made of the Relief Commission are pressing. organization should be set up are pressing. as the Governments in Europe are taking steps on the matter.

I enclose herewith a short memorandum on -

(a) The horelief during the occupation.
(b) The relief required for re-habilitation.

The released French population can be best cared for by their own government through France and I do not therefore consider that we need concern ourselves therewith.

The Belgian people, while more fortunate than the Serbians and Poles in that they are all alive, come out of occupation under-nourished, under-housed, under-clothed, industrial plants ruined, without raw material and without resources in shipping and money to find a remedy.

Assuming this must be accomplished, the problem of organization at once arises. Certain Belgians are anxious that the Relief Commission should liquidate and be hancded over to the restored Belgian government - who should undertake all further relief with loans from the Allied Governments; others wish the Commission to continue to perform such functions as may be assigned by the Belgian government; others are anxious that the Commission should undertake the great problem of economic restoration, acting as hitherto, in co-operation with Belgian unofficial organizations, and drawing its support from our own and Allied governments and public charity. The British Government is opening discussions with our government on the question.

From a purely Belgian point of view the direct operation by their government is a mixed argument of sturdy independence and of natural amour propre and, to some extent, of individual political ambitions; the second proposition of a continuance controlled by the Belgian government is an argument of utilization of the organization until it can be dispensed with at will; the third is an argument which I believe should be further discussed, as it has both moral and economic bearings for the American people. I need hardly mention that the selfish view of myself and my colleagues would be entirely with the first proposition. We would like to have relief from this especially poignant anxiety that has now extended over four years.

With the present misery and economic difficulties facing Europe there can be little hope of Belgian recuperation without the major help coming from the United States. The American people, under your guidance, through its citizens and with the help of its officials, took upon itself the burden of the lead in internal protection and sustenance of this population four years ago. This imposes no obligation but offers an opportunity for further service - the completion of which would confer moral values to our country not to be underestimated.

Intangible as these values are, they cannot be gained by our people unless they are won through some bond of definite American organization participating in the labour and its consummation.

While it can be said that the Belgians are an efficient administrative people, it is my impression that security and effectiveness in the application of these funds, without religious, political or racial bias, could be much more effectively secured by American participation in organization and administration.

There will be a large outpuouring of charity towards the Belgian people which could be stimulated, but in the expenditure of which, unless there is some single channel, there will be enormous waste and corruption, and re-actions will set in to the disadvantage of both Belgian and American people.

If the matter were undertaken by the Belgian government alone, they would naturally have to take their position with the other needy Allied governments under the various Allied controls; whereas, if a distinctly American organization, maintained by the American government, were to be installed for this service, such an organization could easily secure the same tenderness in obtaining priorities and supplies, and complete independence of action from other Allied control that it now possesses. As these controls are dominated by the other needy governments I feel that the Belgeans will get off much worse in shipping and in supplies than if they are particularly under our wing.

If American participation in organization of re-habilitation is to be maintained it would seem logical to continue it through the Relief Commission whose organization is in action and simply requires larger resources, who have already the support and recognition of the Allied governments. and the use of this media would avoid discussion of any new instrumentality with the Allied governments. It would represent the rounding out of an enterprise of our people toward another in which we could have lasting pride.

One of the objectives in peace conferences must be the re-payment, in addition to other damages, to Belgium of the whole of the sums that have been spent by the Relief Commission, together with such further moneys as are spent on rehabilitation. It would appear to me that it would be a pointed and positive lesson to the world for all future time if it could be made a peace condition that the expenditures of the Relief Commission both in the past and in the future are made re-payable by the Germans, directly to the Relief Commission, and that this Commission should refund the sums advanced by the various governments. It would, I believe, be entirely correct for the United States government, if they decide to continue the work through the Commission, to announce that in so doing she considers herself the trustee for the collection of these funds.

I should be glad to have your views in the matter and if you consider the Commission should be continued to this new purpose and that it will have the support of the government, it is desirable that its relations to Belgian organizations and other governments should be properly defined. 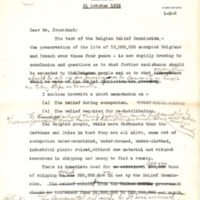