Herbert Hoover writes to Woodrow Wilson about the “growing and dangerous domination of the handling of the Nation’s food stuffs” due to the switch from slaughtering and distributing animal products locally to an industrial model.

I beg to state upon In response to your request I beg to set out my observations on the recommendations of the Federal Trade Commission as to certain lines of action in connection with the five large Packing Firms, .aAs I expressed to you nearly a year ago, I am convinced that there is here a growing and dangerous monopoly in domination of the handling of the Nation’s food stuffs.

It seems to me that it is illuminating to traverse in a paragraph In any understanding of this situation it is necessary to consider the most principal economic causes of this growth. At one time, our food animals were wholly slaughtered to and distributed locally. The ingenious turning to account of the by-products from slaughtering if when dealt with on a large scale gave the national foundation for consolidation of slaughtering into the larger centers. From these this grew the necessity for special cars for live stock transport and the large stock yards at terminals. Subsequent Added to ththese again,is was the application of freezing and cooling processes and for the handling preservation of meat which at once extended the period of preservation and the radius of distribution from the slaughter centers. Some of the The recovery of by-products, but more particularly and the use application of freezing and cooling, required demanded has necessitated large equipment and consequently large capital, not only in and particularly the freezing and chilling brands and storage, operations require not only the primary equipment but in a network of refrigerator cars, icing stations and cold storage at distribution points.

This special rolling stock car service in animals and their products is of the nature of the Pullman Service; it must traverse railroad lines independent of ownership, and moreover it is seasonal and varies regionally in different seasons. For each Railway to have foreseen and to have provided sufficient of this highly specialized equipment is asking the impossible and in any event no particular Railway could be expected to provide sufficient stock to answer seasonal and regional demands. Therefore, control the provision of a large part of this rolling stock car service has naturally fallen to the provision by the larger and more wealthy Packers who have used its advantages as in effect a special definite railway privilege with which to build up their own business. These Firms have in the main, since Federal Inspection was initiated, co-operated with the Government in this matter and have striven to build up the quality and the brands of their products.

Through the establishment of a multiplicity of branch stations and through the extension of their contract practical railway services, privilege they have found themselves in position, not only the trades in to dominate the distribution of interstate animal products but by the use of the same equipment, manufacturing, buying, selling and marketing and organization, and the same good will of their brands they have to successfully involved many other lines of food preparation preservation and distribution. They now threaten every other line of independent manufacturers and distributors. They now vend all over 1000 different articles and the list grows constantly and now comprises a major proportion of the interstate business in many commodities.

Practically five Firms have become predominant in this interstate business. It is a matter of great contention as to whether these five Firms compete amongst themselves, and the records of our Courts and public bodies are monuments to this contention. Entirely aside from any question of conspiration conspiracy to eliminate competition amongst themselves, it appears to me that these five Firms, exactly paralleling each other’s business as they do, with their wide knowledge of business conditions in every section, must at least follow co-incident lines of action and must naturally refrain from sharp competitive action towards each other. Their hold on the meat and many other trades has become so large through the vast equipment, organization and capital with of slaughter houses cars and branches which each of the five controls that it is practically inconceivable that any new Firms can appear, and in any event even sharp competition between them the five can only tend to reduce the number of five and not increase it. Beyond this is the positive that they strategic knowledge that the hold position advantage in marketing equipment and organization must tend to further increase the area of their invasion into trades outside of animal products. I believe it can be contended that these Concerns hadve developed great economic efficiency that their costs and profits are made from the wastes of forty years ago. They are giving the public a service at a greatly less remuneration per nunit than that which maintained before their present great extension.

The problem we have to consider, however, is social as the ultimate results of this expanding contral domination, and whether it must can be replaced by a system of better social character and of at least equal economic present efficiency and of greater promise for the future. It is certain to my mind that these businesses have been economically efficient in their period of competitive up-growth but aside from the fact that there are owners that have been over-paid for this social service as time goes on this efficiency cannot fail to diminish and in the end like all monopolies to defend themselves itself by repression rather than by efficiency. This stage has, I believe, already set in so that while I belive that at the present moment with the restrictions on Packers’ profits now existing, the public is receiving an economic service at low unit remuneration.,Tthis will in my view not maintain over a long term of years. The worse social result of this growth is the under-mining of the initiative and the equal opportunity of our people and the tyranny which necessarily follows in the commercial world.

The Federal Trade Commission has recommended that the Railway Administration take over the Packers distribution equipment and the stock yard terminals. And they further recommend that the Government take over the Packers’ branch houses with view to the establishing of equal opportunity in distribution among all branch managers and traders. While I am in full agreement that the rolling stock car service and the stock yards should be entirely disassociated from the control of the packing industry, I am in considerable doubt as to whether the Government in its temporary relationship to the railroads should undertake this matter through the Railroad Administration and purely war agency. If the reformations proposed are to be of any value, they must be placed upon a permanent basis and not merely for the War. There can be no doubt that this special service, that works to obtain naturally the greatest natural economy, should be operated from a national point of view rather than from that of each individual Railway, but whether by the Government or by private enterprise under control as a public utility, seems to me to require further thought. and in any event to defend upon the ultimate disposal of the railway question.

As to the recommendation that the Federal Government should take over the Packers’ branch houses, cold storage and warehouse facilities, I also find much difficulty. The intention of this recommendation is apparently to lead toward the establishment of public wholesale markets places and in this matter and all important disbursing centers I am in agreement with the principle of such marketplaces but I do not see the solution believe they would provided through the branch houses of the Packers. This country is almost wholly devoid of public markets proportionately places adequate associated with the Railway and water terminals for the proper dealing and distribution not only of animal products but of many other commodities perishables such as vegetables, fruit and fish. —and other lines of preserved food. I am convinced that we will never have an economic distributing system until we have those adjuncts we have established such free market places as adjuncts to the transportation and proper system of public wholesale markets with their system. and Of course they must be general and they must have the necessary equipment of cold storage and warehouse facilities. Beyond this we will never have an adequate and free distributing system until we have a much enlarged standardization of food products in order that producers or and manufacturers and wholesalers of such commodities can shall have in a basis of equality in market for equality in quality. Otherwise the producer of even inferior qualities with large distributing machinery can dominate a given trade and stifle competition. On the other hand, the separate Packers’ branch houses now located as they are in each distributing center, each containing an amount of accommodation only for their own business scarcely and aside from their scattered locations do not furnishes the physical foundation for such a national equipment of wholesale market places. Much of their present property would have to be abandoned and a great deal of construction added to the balance. the balance and even in the full case the location in a given center might not be most advantageous. We are in no position to find the material and labor for such enterprise during the War for such an enterprise even if it were advisable that the Government undertake it. My own instinct is against Federal Government ownership of such facilities and I feel that such facilities that they would in the long run ultimately work to the greatest public good if they are provided for by local enterprise or by municipalities or by the combined action of Railway Companies at definite centers in any case all under control as a public utility and possibly with some form of Federal assistance to secure their inauguration and in any case under control as public utilities. Altogether, I do not consider that the prime object of maintaining the initiative of our individuals and of our local communities is to be secured by the vast expansion of Federal activities.

In summation, I believe that the ultimate solution of this problem is to be obtained by offering equal distribution and equal transportation facilities to the manufacturing and wholesale food trades of the country. In this situation I believe that the fifty minor packing establishments could successfully defend themselves in competition, and without economic loss to the community., and by competition constantly improve our manufacturing and distributing business processes.

I also would separate the whole problem into a question as to what should be done as a war emergency and what should be done as an ultimate solution of the whole problem question. I do not feel that the Government should undertake the solution of the problem by the temporary authority conferred under the war powers of the Railway and Food Administrations which must terminate with peace, but rather that it should be laid before Congress for searching consider- exhaustive debate and development of public opinion just as has been necessary in the development of the public interest in our Banks, Insurance Companies and Railways.

The activities of the Railway and Food Administrations are necessarily founded on securing the largest service and the least disruption and danger to distribution during this period of national strain. The Packers are today performing their economic duty as distinguished from the social results of their organization, and the only outstanding question from a purely Win-the-War point of view, is whether the remuneration for their services is exorbitant. This is a matter which can be remedied during the War by regulation and taxation. 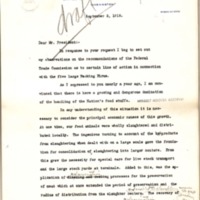