Herbert Hoover tells Woodrow Wilson with regard to Mr. Gore’s amended bill and how it will affect the Food Administration’s efforts to conserve and make foodstuffs available to the American people.

Some considerable effort will be made in the Senate to secure the substitution of Mr. Gore’s amended bill, though I am uncertain as to what the possibilities of success are in this effort. I enclose for your information some notes on Mr. Gore’s substitute which have been furnished me by Judge Curtis Lindley, who is assisting me on the legal side.

I would like to point out in this matter that Mr. Gore’s substitute extracts absolutely the whole of the teeth from the bill and renders it impossible for us to control wasteful practices in distribution and manufacture; impossible to control extortion in profits and charges and that , makes it impossible for us to control speculation for it reduces the hoarding and Board of Trade provisions to a nullity. iIf the bill should pass Congress in this form the whole objective of the Food Administration in the sense of securing for the consumer in this country foodstuffs at a reasonable ratio to the return to the producer, is entirely hopeless. I may also mention that the form of administration proposed by Mr. Gore also eludes destroys the whole question of the imaginedtive side of leadership of yourself and sense of volunteer service in the interest of the Nation, which is absolutely critical in order to amass the devotion of the people. I simply cannot hope to secure this the soul of administration if it is to be controlled by a meticulous “board” with its impossible mixture of irresponsible executive and advisory functions. Moreover with your effort your wish the Food Administration has already been launched upon this basis and it becomes merely a drive at yourself personally and to a lesser degree to myself.

I am Your Obedient Servant 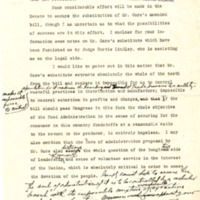