In regard to Mr. Ong’s letter, which I return herewith, there is a great deal in his contention not only in the matter of present supplies but an inquiry should be made to determine if these ships are capable of carrying fresh meat. The meat-carrying tonnage of the Allies is not only limited but is likely to decrease steadily, and sooner or later these boats, if adapted to this purpose, would need to be pressed into the fresh meat trade. It seems a great pity, if they are adapted to trans-Atlantic meat-carrying purposes, to have them torn to pieces and it would appear to me that some other kind of ships might be taken for transport and not destroy any reserve of refrigeration. 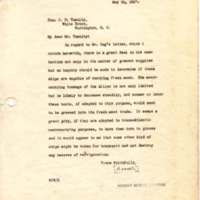