from the ordeals that we imagine may come to us and worse still to those we love, but the anchor will hold, the Divine Promise will be kept- I will keep him in perfect peace whose mind is stayed on me. I forget the beautiful promise and fail to stay my mind on Him but always when I do remember Him the strength and the quiet come to me from the depths. That you have found the Peace is one of the lasting joys of my life now and I feel like singing songs of gratitude to the Beloved Lord in our hearts that he gave it to you at this time when you have so much need of it. Yes I know that you are disturbed at times for the clouds of fear and perplexity cover the soul thickly at such times as this, the powers of darkness see to that, but always the light penetrates the darkness. We have but to be quiet and let the Rays come through. The powers of darkness seem to be having their way pretty generally now and because we too need the purging effect of suffering and sorrow they affect even those of us who have no malign purpose, the so called innocent ones. But who is innocent? Who is without sin? When I see passing through my own mind the kind of thoughts which are responsible for war, fears, hates, resentments and so forth I realise that only a radical change in human Nature itself can do away with war. When each one of us allows the Light to penetrate the darkness there there will be no darkness on the face of the earth. Thats a far cry from our nature as it is! But here where we see two human tr beings whose natures have become God-like, we dare to hope for that Divine consummation in the whole of mankind. That a few like Christ, Buddha, Ramakrishna and now Sri Aurobindo and the Mother, besides others less well known have become fully conscious of That which they are, Divine Beings, one with the Supreme Being, is proof and pledge to the rest of humanity that their destiny too is to become That. The Hindu Scriptures often refer to God as That simply to indicate that He is beyond mind and speech, indescriblable, unthinkable, to be known only through spiritual experience.
I started this letter yesterday and today by the Pacific Clipper I got at last two letters from loved ones, one from Helen and one from my dear I got to know her through my my friend the Swami. It was she that I visited at Lake George the summer before I came here and she came to India with me. She had to go back after a short visit here because she has a husband and children, but how she longs to stay! Helen speaks of going to New York to live, but does not realise that I have had no news from her for so long that there is a wide hiatus in her news about herself. Has she definitely given up work- it seems evident that she has, and I certainly hope so. Has she a government pension? I devoutly hope that too for it will be sure money for as long as she has to live, I suppose. Did she get her legacy and has she been persuaded to use it herself and not share it with Marion and Cousin Jessie? Do when you write tell me all you know about her situation. Her health seems to be improved after a tonsil operation, but it seems none too good. But I am so glad that she is back in her beloved New York with her interesting friends. I think she was dying of bordom in Washington.
So there is one air mail service left intact! Helens letter took one month and a day to reach Pondicherry. That is doing well for now-a-days. So I shall send your letters, at least the one a month letter by that way, but other letters not for it is terribly expensive When one thinks in terms of rupees as one does here rather than dollars it seems shockingly expensive. But speaking of psychology, isnt it amusing that Helen who has not written me except for two very short notes since the new year since I have been here spends seventy cents to hurry this letter on its way. Maybe she thought I die before a regular letter reached me! By the way you had better register every letter you send to India now-a-days- I have probably said this before. I got a return card from Santa Monica dated May forteenth. It took seven weeks to get here but it was reassuring to know that the first of two letters that I wrote you close together after my birthday- no one was just before it and the next a few days after- 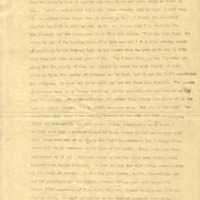