“We are unprofitable servants: we have done that which was our duty to do”. XVII, 10. 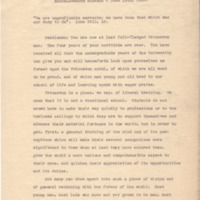