The Nightingale Collection consists of military service documents, both official and personal, diary pages, 7 issues of “The Hatchet,” personal/business correspondence, and dogtags and a WWI Croix de Guerre medal. The collection originated in connection with Captain Nightingale’s assignment as President Wilson’s personal baggage handler and train scheduler during the Paris Peace Conference from 1918-1919.

The collection is arranged in a singular box with different mediums

John Trowbridge Nightingale was born in Boston on August 4, 1888, a son of Samuel Crawford Nightingale and Ella Trowbridge Nightingale. His father died in Boston on April 30, 1904. Ella T. Nightingale signed his room lease form at Harvard University in 1907. The Harvard University Catalogue of 1908 showed his address to be Wellesley Hills, Mass. Nightingale graduated cum laude from Harvard College in 1910 with an A.B. degree. After graduation he traveled in Europe for six months. Upon returning to the States, he worked for three years for the Hood Rubber Company in Boston. Then in January 1914, he got a position as Treasurer of the Laminated Materials Company of New Westminster, British Columbia; their Head Office, according to company stationery, was located in Boston, Massachusetts. At the Laminated Materials Company, Nightingale worked with A. N. Hood, whom the former listed second in his Officer’s Record Book, after his mother, as a person to contact in case of emergency. While in Europe on active military duty, Nightingale made several business contacts at Hood’s request.

Nightingale entered the second Officers’ Training Camp at Plattsburg, N. Y., on August 27, 1917. Three months later, on November 27, 1917, he was commissioned a Captain in the Coast Artillery Reserve Corps, and was placed on active duty on that same date for military service during World War I. At this time his mother was listed in his Officer’s Record Book as being from East Jaffrey, New Hampshire.

As Captain in the Coast Artillery Corps (CAC), U. S. Army, Nightingale sailed for France on July 30, 1918. He was a member of the 71st Artillery, where he became the Supply Officer responsible for dispensing payroll sums to organizations within the 71st. After Armistice, Capt. Nightingale requested that he be allowed to remain in France, as his regiment was soon to depart for the U. S. From Col. Long of the 71st Artillery he received such a recommendation based on his character and knowledge of the French language and customs. In December 1918 Nightingale became a member of the American Peace Commission charged with the duty of “making all arrangements for the sorting, labeling, transportation and final delivery in Paris of the personal baggage of the President,” his immediate party and members of the American Peace Commission. In addition, Capt. Nightingale was in charge of the train schedule arrangements of the Special Presidential Train, including the President’s trip to Belgium in June, and of compiling an expense report to the Army of the Peace Commission.

Nightingale also was given the assignment of touring the devastated regions of France in January, by automobile, “for the purpose of surveying for the President’s proposed trip”, and later an assignment as officer courier for dispatches sent from London to Paris. Sometime during his time in Europe, he was decorated with the “Order of the Crown” by King Albert of Belgium.

In the course of his responsibilities, he was in Paris, France; Rome, Italy; London, England; and Brussels, Belgium. Nightingale returned with the President and his party on board the U.S.S. George Washington in July of 1919. He was honorably discharged from the Army on July 9th, 1919.

From The New England Historical and Genealogical Register, January 1955, we learn the following about Nightingale’s employment history: “He was a partner in Spencer Trask & Company until 1939, when he established the firm of Nightingale and Company, investment brokers. He was at the time of his death President of Cromwell & Company, investment counselors.”

Nightingale was a member of several clubs and societies, including the following: the Somerset Club and the Athenaeum, both of Boston; the Myopia Hunt Club in Hamilton, Massachusetts; the Harvard Club of Boston and of New York; the Philadelphia Club; the Boodle’s Club, London; The Essex Institute of Salem, Massachusetts; and the Society of Colonial Wars in the Commonwealth of Massachusetts. He also served as director of the South End House and of the Community Workshop.

Nightingale married Augusta Wahrendorf Harrison; they had no children. He died at Phillips House, Boston, on August 17, 1954. He was survived by his wife and a sister, Miss Nina Nightingale of Cambridge, Massachusetts.

From the papers and mementos that Nightingale saved, it is easy to conclude that he not only ably performed his military duties but that he also enjoyed his time in Europe- he took advantage of opportunities to see the sights and experience the culture. Nightingale had a “sense of history” in that he kept his papers, and organized many of them into a scrapbook. The documents are in very good condition. 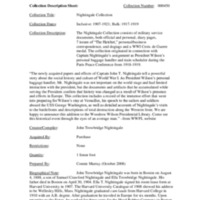 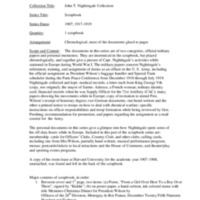 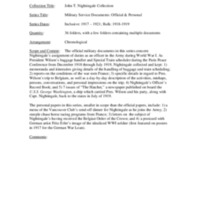 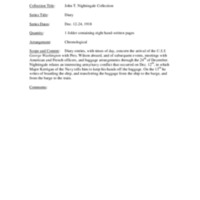 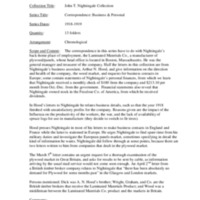