A newspaper article about the use of homing pigeons by the Allies in World War II.

Fine work all round by feathered corps

Thousands of Australian-bred homing pigeons contributed to the defeat of Japan in the Pacific theatre during World War II.

They were used by both American and Australian troops, ships, and even aircrews to carry vital operational and rescue messages where no radio was available or terrain or weather conditions made the use of normal communication impossible.

Two pigeons – unfortunately unnamed, and designated only by numbers – were awarded the Dickens Medal, the “animal VC” for gallantry.

The Army boat had grounded on a beach at Wadau, in the Huon Gulf, during a heavy tropical storm, June, 1945.

A rescue ship was sent, and the boat and its valuable cargo of stores and ammunition was salvaged.

It was this particular pigeon’s 23rd operational flight. It had covered a total of 1615km.

During the fight for Manus Island, the US Marine patrol sent to a village of Drabito was strongly attacked by Japanese while returning to its headquarters with valuable intelligence information.

The patrol’s radio was destroyed during the fight, so two carrier pigeons were released with a message to headquarters warning of an imminent Japanese counter-attack.

Both of these birds were shot down immediately, and the enemy increased its efforts to wipe out the patrol.

One pigeon, DD:43:Q:879, remained, and during a lull in the fighting it was released as a last attempt to warn of the coming attack.

Heavy fire was immediately directed at the pigeon, but it reached its destination 48km away in 46 minutes.

As a result Drabito was heavily bombed and the Marine patrol was extricated.

Retired US Army Major Bill Benston, who now lives at Toowong, recalled last week that the pigeons had been of particular value to small ships carrying supplies to troops in the islands.

“Many of these ships were not equipped with radio, and relied on the birds as their only means of emergency communication,” he said.

Pigeons had been used in the air-sea rescue operations in England before their introduction to the Pacific.

According to the official Australian war history, the Corps of Signals Pigeon Service was formed in Australia in early 1942 with the initial object of providing an alternative means of communication between mainland coastal defenses in the event of an invasion.

The service was manned by pigeon fanciers, and other fanciers presented birds that enabled the Army to amass a flock of 13,500.

After the service had established a network that covered a large area of Australia, No 8 Pigeon Section was sent to New Guinea in December, 1942.

When it was found that birds from the south often became ill in New Guinea, local breeding lofts were established.

Many operational problems had to be overcome. In some places birds had to learn to rise nearly 700m in 5km, often in rain or mist, to clear mountains.

As well as providing pigeons for the Australian Army, the service provided lofts to the American forces at Saidor, Arawe and Manus.

The birds were particularly useful to the Australian Fifth Division, which was widely scattered between Madang and the Sepik.

On Bougainville they were used by patrols and small craft, and to carry war correspondents’ reports which would otherwise have taken 48 hours to get to Torokina.

On one occasion six pigeons were dropped by parachute to a patrol that had lost communication with its headquarters.

Another patrol reported after a grueling ordeal in the bush that it had run out of food and had had to eat the blue peas it was carrying to feed its pigeons.

At times the weather discouraged even the pigeons – and their human handlers.

“Sent a long message to Brigade by pigeon. The -------s won’t fly. Ceiling too low. Up in a tree and not a stone in sight. Bloody sorry I didn’t eat them the other night when they were making so much din . . .”

“The co-operative action taken by your office in furnishing pigeon communications for the United States troops during recent operations is greatly appreciated.

“Reports from the field indicated that the value of pigeons as an auxiliary means of communication has been established on a firm basis of successful flight performed.

“The birds, equipment and personnel furnished from the Australian Pigeon Service have proved to be of the highest value in this respect.” 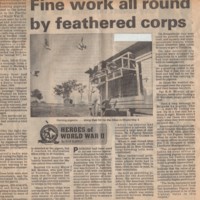