A newspaper article about Sgt. Lucas, A US Army Pigeonier.

Enlisting in the Signal Corps in 1917, Harry Lucas embarked on a career handling more than 20,000 “living military vehicles”-pigeons. As a U.S. Army ‘Pigeonier,’ Lucas’ service spanned a 41-year period, encompassing World Wars I and II as well as the Korean Conflict.

Though all of the birds he trained were important as military communication conveyances, one bird named “G.I. Joe” was perhaps the most famous. Joe was recognized by Congress and awarded the “Dickens Medal For Gallantry” for a job well done while attached to U.S. troops in Italy. On October 18, 1943, Joe flew into the British lines just in time to intercept an allied attack on the village of Colvi Veccia carrying a message that the front line troops had already captured the village. The scheduled bombing raid would have released its ordinance over more than 1,000 British soldiers’ lives.

When the Army ceased pigeon training in 1957, Harry retired. At 74 years old, he was the oldest sergeant in the U.S. forces. During his career, Lucas trained such airborne heroes as G.I. Joe, the Kaiser, Dark Lady, Treasure Trove, Red Eagle, and Black Bill. His “force” carried messages all over the world, ranging from Europe to places like Australia and India. 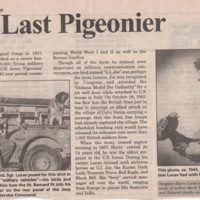