The sources used in this Section, to which reference is made, are:

. . .The basis of this Section is the work of a Commission on Belgian Affairs which on was charged to report on the rectification of the Belgian frontier with respect to and and a possible rectification of the Dutch frontier with the object of compensating for possible cessions to . The Commission was appointed in consequence of the presentation by of the political claims of before the Supreme Council on ebruary 11, 1918 (B.C.28). urged revision of the political and territorial arrangements imposed on in , the annexation of neutral and of , closer political relations between and , absolute control of the , the transfer of the southern bank of the and of to , the compensation of for this transfer at the expense of .

On stated on behalf of the Belgian Commission that it was uncertain whether or not the Commission had the power to hear Dutch representatives or to consider the questions of the left bank of and of Dutch . (B.C.40). considered that “the Conference had no power to ask , a friendly and neutral State, to cede any portion of its territory” and so the only question before the Commission was the “purely practical one” of inquiring whether it was feasible to alienate any portion of German territory to in case should agree to make cessions to . “The Commission had not been asked to adjudicate on the value of the exchange. Only the Dutch could decide whether it satisfied them”. considered that the terms of reference of the Commission should include also the legal status of the Treaties of since the violation of Belgian neutrality had destroyed the old international position of . thought that the mere fact of violation had not invalidated the treaties, but he agreed that a revision might be necessary. The Commission was therefore charged with the study of the revision of the Treaties of .The Commission issued two Reports on Belgian affairs. One, on the revision of the Treaties of , presented , was accepted by the Supreme Council on , and is the basis for Article 31 of the Treaty.The second Report, dealing with territorial changes, was completed on , and was passed on by the Central TerritorialThese conclusions were taken from the draft prepared by the American delegation (Annex III to the minutes of ), except for a verbal modification in the last paragraph, as the American version “to create a regime for in accordance with the League of Nations” was thought by some members of the Commission to imply a limitation on Belgian sovereignty.On the Supreme Council (B.C.47) approved the Report of the Commission on Belgian Affairs with respect to the revision of the Treaties of .

The conclusions of the Report were embodied in their present form in an article approved by the Council of Five (Foreign Ministers) on (F,M,5).utral .

Article 32 corresponds to paragraph one of Article I of the Report of the Commission on Belgian Affairs. It was voted by the Commission at its fifth session, .

Prussian .Article 33 is based on paragraph two of Article I of the Report of the Commission on Belgian Affairs, which read:“ renounces in favor of all its rights and titles over the communal woods and domania wood situated in Prussian ”. In this form it was voted by the Commission at its fifth session, . The cession, it was explained, was designed to repay for the destruction of forests carried out by the Germans in .

In the Central Territorial Commission the wording of this article was changed to read:“ renounces in favor of the sovereignty over the part of Prussian covered by the communal woods and the domanial wood, as well as all rights and titles over the said woods.”In the Treaty the boundary is defined in dfferent wording, the - road being indicated as the frontier.

Article 34 is based on Article 2 of the draft articles in the Report of the Commission on Belgian Affairs. The Belgian delegation presented at the third session of the Commission, , a map showing alternative rectifications of the Belgian-German frontier. On the proposal of () the “green line”, based mainly on ethnogaphic considerations, was teken as the basis for discussion: the “black line”, based on the principle of military defense, was reserved for consideration in case the regime adopted for the left bank of did not offer sufficient security. At the fifth session of the Commission, it was unanimously decided to assign the whole of to . () urged that , especially the mining district in the north of that Kreis, was economically oriented towards Belgium. Mr. Haskins (U.S.A.) and Sr Eyre Crowe (Britain), however, reserved their opinion with regard to Eupen because f the mixed character of its population.At the seventh session of the Commission, the stipulation was added on the motion of () with respect to the cession of “unless a majority of the population makes formal protest”. Discussion contued on the ession, the British and American delegates poiting out that , in presenting Belgian claims, made no mention of . It was agreed, however, that in any event should have the unrestricted right of exploiting the mineral deposits of the Kreis of which are indispensible to the works of the in .At the eighth session of the Commission, , () and () withdrew their objections to the annexation of , provided the majority of inhabitants of this Kreis made no formal objection to annexation. The Commission adopted the Article in the following form:“ renounces in favor of all its rights and titles over the territories composed of the whole of the Circles (Kreise) of and of .

Nevertheless, the population of the whole or part of the said territories may within six months after the coming into ect of the present Treaty protest against this renunciation.It will be the duty of the Belgian Government to submit any such protest to the League of Nations, whose decision Belgium undertakes to accept.”The method of consulting the population of and indicated in the Treaty was inserted subsequently.

Article 35, establishng the international commission to delimit the Belgian-German frontier, corresponds to Article 3 of the Report of the Belgian Commission as amended by the Central Territorial Commission, The clause “taking into account the economic factors and the means of communication” was added by the Central Territorial Commission (eighth session, ) after had explained that the frontier line would intersect at two or three points are -- railway if it strictly flloed the political boundary indicated in the treaty.Article 36, on the nationality of inhabitants of the ceded territory, corresponds to Article 4 of the Report of the Belgian Commission, except that the change of nationality is dated from the time “when the transfer of sovereignty...has become definitive”, instead of “at the end of the six months” alloed for plebiscite. In view of Article 34, the phrases are equivalent in substance.Article 3, on the right of option, corresponds to Article 5 of the Report of the Belgian Commission, except as brought into uniform wording with analogous clauses in other parts of the Treaty.Article 38, concerning the return of archives and official records of all kinds to , has no equivalent in the Report of the Commission on Belgian Affairs.The minutes at hand do not indicate the date of its insertion.Article 39, concerning the assumption by of financial liabilities in consequence of annexation, had for its equivalent Article 6 in the Belgian Commission Report: “The territories referred to above will be acquired by Belgium free and clear of all charges”. In rticle 26 of Part IX is the clause: “ also shall be exempt from making any payment or any credit under this Article for any property or possessions of the German Empire or States situated in German territory ceded to under the present Treaty”.

The Supreme Council agreed on that should enjoy the special exemption mentioned in Article 256 (I.C. 180 D). 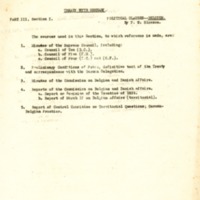