Woodrow Wilson writes to Richard Heath Dabney regarding politics and general public disinterest in the electorate.

I am all right again and the reports about my “break down” were absurd. I simply had to go to bed to cure a severe cold.

I am very much distressed to hear that you do not sleep abnd that your nerves are bad, and I am rejoiced to hear that you are going to the other side of the water to recuperate. This is exactly the thing to do, and I wish you all the strength in the world, my dear fellow.

I think that, politically, things are in fairly satisfactory shape. As a matter of fact most of the support of Clark and Underwood is perfunctory and on the surfaced, and underneath, if I am correctly informed, the purpose to nomiate me is as strong as it ever was. These things cannot be depended upon, of course, but this is what is reported to me by men who ought to know.

The combination against me has certainly done wonders, and yet my chief disappointment in the primaries of various states is not that they did not result in my favor, but that they were so small in respect of the numbers who voted. The people did not take any ineterest in them. They were about equivalent to caucuses held through the polling places. Possibly the people will wake up later to the significance of the whole thing, but for the present there seems to be extraordinary lethargy and indifference.

I saw Dick Byrd in New York on Saturday night and he is very hopeful, not to say confident, of controlling the Virginia situation in my favor. At any rate, the fight there is by no means in bad shape. 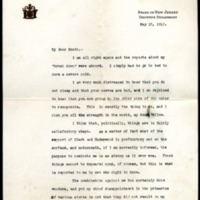