Woodrow Wilson address a group of students from the Columbia School.

I am very glad to officiate on this occasion and to address a club that bears this name. I dare say you think that schoolmasters are often a bit hard on you in requiring you to do things in order that you may pass the tests of the school, but I want to warn you that after you get out of the school you are going to have harder schoolmasters than you ever had before. For the world requires that we make good, no matter what happens ; and the man who does things amounts to a great deal more than the man who wishes he might have done things, and who promises that he will do things.
So that as you have begun as an achievement club, you must finish as an achievement club, and in no other way. The men I am sorry for are the men who stop and think that they have accomplished something before they stop at the grave itself. You have got to have your second wind in this world and keep it up until the last minute. Now, if this flag means anything, it means achievement not only, but it means that achievement that does not center in ourselves. It is nothing to be proud of that we have done a lot for ourselves, but it is something to be proud of that we have done it for other people, ––that we have imagination in us, we have size in us, to hold in us the image of our country such as this great flag stands for. And there is nothing which we can not achieve, and there is nothing which we do acheive, that will not leave the sweetest memories in our minds.
Therefore, it is with the greatest sense of privilege that I present to your representative this emblem of honor and achievement. 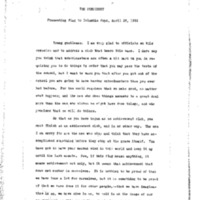