I find that Mr. Lombardi of Dallasis too old to be considered, so he will have to be eliminated. Burleson, who is here today, tells me that Doctor Johnson, of whom you speak, is a crank of the first water and would not do .I do not know Mr. Carles Starek and the objection to him might be that he is not sufficiently prominent for his appointment to carry weight. That is something to be considered in this board if it is to be thought of in the same sense as the Supreme Court. I can think of some men that I am sure would be equal to the job, but they would not carry confidence and therefore would be poor appointments.If the elder Simmons was appointed for the two year term, you could replace him byHouston afterwards, if you desired. Then with Miller from the Pacific Coast and Wheeler or someone else, from Chicago you would have the West taken care of. If you could not do better, George Foster Peabody or Gordon Abbott would not be bad for the East and Harding of Alabama seems a good prospect for the South. If Harding does not bear inspection, then your suggestion of Gregory would not be bad. Gregory is something of the same type as Carter Glass and while he knows nothing of the matter now, yet within six months he would be as well informed upon the subject as Glass was after that period of time. Call me when you need me for I am always under orders.


PS Any recommendation made by Members of Congress should be prima facie evidence of unfitness, and I would not take any suggestions from that quarter without the most careful investigation. What I mean is that their recommendations would be political and therefore largely worthless. 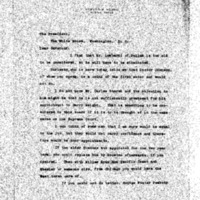