For the United Colored Democracy and the Colored People of the United States. 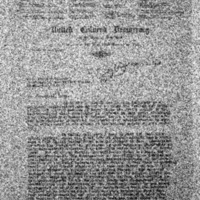