We have struck a snag in the matter of the Nicaraguan treaty. I have been before the Committee twice, and they have had a speparate meeting for considering the matter, but there is quite a determined opposition on the part of the minority of the Committee against the Platt amendment idea — in fact, against any extension of our authority over these countries. I believe that a majority of the Committee will endorse the treaty, but Senator Bacon says that, under existing conditions, it would be impossible to secure a ratification of the treaty at the special session in the face of any considerable opposition. According to the rules of the Senate, a minority can delay action, at a time like this, when most of the Senators want to go home and are only prevented from going by the pressure that is back of bills that must necessarily be considered. Senator Bacon thinks that we would have no trouble with a bill providing for the purchase of the canal option and the naval base on Fonseca Bay.
I write, therefore, to ask you whether it might not be wise to separate the two and put the treaty through now providing for the purchase of the canal site and the naval base and then, at the regular session, try to secure a treaty extending our authority along the lines of the Platt amendment? The matter could then be decided upon its merits and time taken to overcome any opposition the minority might be disposed to offer. You could decide whether, in submitting the second proposition relating to the Platt amendment, you would also recommend the plan I laid before you of lending our financial rcredit. It might be that the lending of our credit, with an agreement as to the appointment of an inspector of customs, and permission to protect our interests there in case of disorder, would be sufficient, and the offer of a real material advantage might — I think it would — overcome the objections that have been made against the proposal; at least, it would give us an opportunity to present a matsured policy and invite the judgment of the country on it without delaying the acquisition of the canal option and navlal base. I have asked the Nicaraguan Minister to tell his Goverhnment of the situation and see whether they are willing to separate the two propositions and act now upon the canal option and naval base. He promises to let me know in the morning, and I write you now so that you may have time to think it over and let me know, if possible, tomorrow morning.
I expect John Lind to arrive tomorrow.
The despatches today from the City of Mexico are more encouraging. O’Shaughnessy reports that the spirit of the present administration toward the United States has changed in a marked degree in the last three days. He also says that there is a report that Huerta will resign the Presidency in favor of the Minister of Gobernacion and that Felix Diaz will not proceed further than SanFrancisco. The Minister of Finance resigned because he refused to consider the suggestion of certain bankers that there should be a foreign inspector at the Treasury Department in case the said bankers advance the present administration funds. The President is hastening his message giving relief to the prisoners at Chihuahua.
I have just learned, indirectly from Mr. Tumulty and directly from Mr. Foster, that you approve of the appointment of Mr. Fleming. I will make the appointment begin on October first, but he can come into the Department before thtat if he likes, to acquaint himself with the work. I fix the date at October first, because Mr. Pepper wants August to round up the work in the Department, and then he will be entitled to his month’s leave of absence, but it is necessary to have the man picked out so that he will be ready to start in the first of October, and I am sure that Mr. Fleming will not object to the delay.


With assurances of my respect, I am,
My dear Mr. President,
WJ Bryan


PS Mr Quodra, of Nicaragua thinks that the signing of the treaty as it is would greatly help them even though its ratification was delayed until fall. 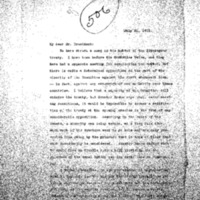