Statement Regarding the Intervention in the Mexico Situation

Statement Regarding the Intervention in the Mexico Situation

Henry Lane Wilson encloses the following statement regarding intervention in the Mexico situation.

If Recognition is not accorded in some form or other, our duties as a civilized nation, pledged to the world to preserve the peace and the order of this Hemisphere, point directly to immediate and effective intervention.
This should be done in the following way:

First: By discreetly removing the already decimated and ruined American population of Mexico.

Second: By the transfer of the charge of our diplomatic and consular establishments to the representatives of other powers.

Third: By the massing of our fleet in overwhelming proportions, aided by effective marine reserves, at every Mexican port on the Atlantic and the Pacific.

Fifth: By the appointment of commissioners, one of whom should be the Ambassador, another the General–in–Chief of the army, another the ranking officer of the investing fleet and another a member of the Committee of Foreign Affairs of the Senate. The duty of this commission would be to seek, by a preliminary action, a reconciliation of all the contending forces in Mexico, with the understanding that their duty should be urgent, expeditious and not detained by any dilitory methods, and with a further understanding that they should follow in the path of invasion, reestablishing the rule of law and dispensing justice and order in the name of the United States.
Any invasion should be accompanied by a public statement that our purpose is not one of aggression, but that we are acting in the discharge of a duty to humanity and civilization and that when once constitutional methods and practises are reestablished and firm government installed our troops will retire to the United States. 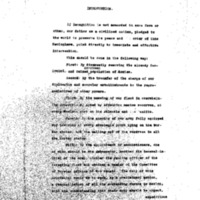