I have had real pleasure in meeting here at my residence your private representative or emissary, Mr. Henry Jones Ford, Professor of Princeton University.
With Mr. Ford I discussed certain political aspects of the Philippines. He assured me that we (you and I) coincide in our thought regarding the possibility of establishing in this Archipelago a republican form of government similar to that of Switzerland under some form of guaranty or protection. I assured him that the ambition of the Filipinos to live an independent life, to have a government patterned after their own modality and uses, is universal. For this ambition the Filipinos went to war more than once, for this same ambition they are peaceful under American protection and promises.Mr. Ford also took up the question of language and the probable status of the American officials and employees of the Philippine Government. It is my opinion that under a native government, the English language will not be stricken off the school plans nor discouraged by any means. I realize how indespensable the English language is becoming in all kinds of transactions and relations every day.
As to the status of American officials and employees I gave Mr. Ford to understand that should a radical change take place in the form of government here it would be a wise policy to let them continue in office until they resign when their positions will be gradually filled by Filipinos.
The Filipino is not prejudiced against any people or race. What Japan had done with regard to using foreigners where natives were not qualified can be repeated in the Philippines and with preference in favor of the Americans. Finally, Mr. Ford, showing great interest in the welfare of my people recommended great patience, avoiding by every means disorders and outbreaks which might entangle and make difficult the solution of the independence problem. As to this, I told Mr. Ford that no fears should be entertained. The Filipino is by nature a lover of peace, so much so that his usual peaceful mood goes sometimes beyond the prudential limit.
I state all this in writing in order to ratify and authorize with my signature all the thoughts expressed during our conference.

Hoping that God will enlighten you and preserve you for the welfare of your country and my people, I remain,
Emilio Aguinaldo 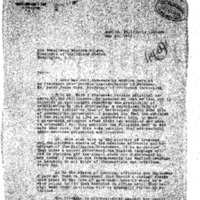