Woodrow Wilson writes the first draft of his statement regarding relations in Latin America.

For morning papers March 12
MESSAGE TO CENTRAL AND SOUTH AMERICAN STATES
In view of questions which are naturally uppermost in the public mind just now, the President issued the following statement. One of the chief objects of my administration will be to cultivate the friendship and deserve the confidence of our sister republics of Central and South America, and to promote in every proper and honorable way the interests, both material and political, which are common to the peoples of the two continents. I earnestly desire the most cordial understanding and cooperation between the peoples and leaders of America and, therefore, deem it my duty, as it is also my pleasure, to make this brief statement, and address to the several governments of our neighbor republics my first formal official act utterance. Cooperation is possible only when supported at every turn by the orderly processes of just government based upon law, not upon arbitrary or irregular force. We hold, as I am sure all thoughtful leaders of republican government everywhere hold, that just government rests always upon the consent of the governed, and that there can be no freedom without order based upon law and upon the public conscience and approval. We shall look to make these principles the basis of mutual intercourse, respect, and helpfulness between our sister republics and ourselves. We shall lend our influence ambition, intrigue, and defiance of constitutional right weaken and discredit government and injure none so much as the people who are unfortunate enough to have their common life and their common affairs so tainted and disturbed. We can have no sympathy with these who seek to seize the power of government to advance their own personal interests or ambition. We are the friends of peace, but we know that there can be no lasting or stable peace 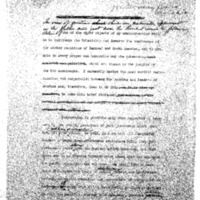