Informal discussions at a political dinner seem to indicate that the people support President Wilson in going to France.

On yesterday you honored Senator Gerry and myself by seeking our opinion with regard to the general impression of the necessity of your attending the Peace Conference. I then unhesitatingly replied that I believed that the necessity was recognized by a large majority of the members of the Senate. I now discover that there is a grave diversity of opinion with regard to the effect that such action on your part might have and it has occured to me that you would possibly be interested in a frank recital of these various expressions.

Last night I had the pleasure of assembling at a dinner with about thirty of your closest and strongest political supporters. The assembly involuntarily and spontaneously resolved itself into an unofficial and temporary committee upon the welfare of yourself and the Democratic party. It might seem presumptuous that any Democrat should take the liberty of even suggesting the effect of the future conduct of one who has always been intuitively right and whose success has not only been beyond that of his party but supreme throughout the world. The debate and the suggestions, Mr. President, came from no presumption, but from the love that each man there has for you and the hopes that are wrapped up in your career. The following are some of the points urged most strongly by those who believe that it would be a mistake for you to attend the Peace Conference, namely:

Those who believe that it will be necessary for you to attend the Peace Conference expressed these views:

You know, of course, that the latter expressions were mine as well as the expressions of a number of other supporters of yours who attended the dinner. I must say, however, that I have the very highest regard for the opinions of those who expressed contrary views. I have again this morning, when visiting several of the Departments, listened to similar arguments, both pro and contra. Should you desire at any time to speak to any of these gentlemen with regard to the matter, I will, of course, feel at perfect liberty to submit to you their names.

Personally, I hope that if you do go to the Peace Conference you will not come back until your program is adopted. Then I know that you will come back with the recognition that you have won and are entitled to, a recognition that will not only reflect glory upon you but upon your party which hangs and depends upon you. 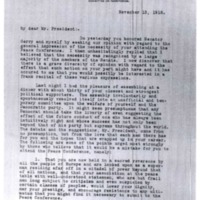